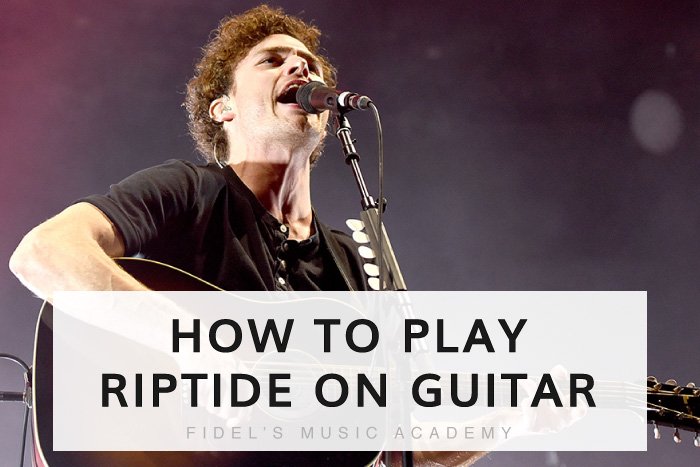 Today I’m going to teach you the Riptide guitar chords and the simplest way to play the song on your guitar.

Riptide, written by Australian artist Vance Joy, has become an enormous hit. Ukulele and guitar players alike have gone crazy for the song.

It’s a simple, catchy tune. And I’m going to show you how to play it on guitar with three easy chords.

I’ll also reveal why it sounds terrible when you try to play guitar along with the recording, and what you can do to make this song sound superb. Let’s dive in!

Who is Vance Joy?

Born in 1987, he grew up rollerblading and playing guitar. “Fourteen-year-old boys are obsessed with angry-boy music, so I was obsessed with Metallica — and I learned all the intros, like ‘Master of Puppets,’ and thats when I started playing.”

His later years looked set to be Aussie rules football. But in 2008, sometime between playing in the Victorian Football League and winning awards, he began working on the Riptide guitar chords.

The evolution of Riptide

You may know Riptide as a ukulele song, but Vance Joy initially wrote the bones of the song – the chords and first two lines, on his guitar in 2008. Then he put it aside.

Four years later, he tried the melody on a ukulele, and creativity started flowing again. The entire song came together in a couple of days.

Riptide was released in 2013 with enormous success. It came in #1 on Triple J’s Hottest 100 that year and become the longest-charting song in ARIA Chart history (107 weeks in the top 100).

This single hit was the catalyst for Vance Joy’s success, leading to a major US record deal.

In an interview with The Australian, Joy said of the song “I still enjoying playing it, and I play it pretty regularly. For me, it’s the song that opened up all these doors. I don’t think I’d have a career, really, if I didn’t have that song — or it would look a lot different.”

The Riptide guitar chords are fairly simple. Which makes sense when you know that Vance Joy loved playing music, but hated theory.

The chords we’re going to use to play it are Am, G and C. If you don’t know how to play those chords, check out these videos:

How to play Riptide on guitar

Now that you have those chords down, let me show you the best way to play Riptide on your guitar.

This is a very beginner friendly version. Nice and slow.

When you get better, you can speed up, play in different positions, and muck about with strumming patterns. For now, I just want you to play along and get the three chords changing in the right spot.

Give it a try:

Keen observers might be wondering what happened to the bridge in this song. Well friends, if you’re at that level, you probably don’t need this tutorial! I’ve intentionally left it out of my version because it makes the song super easy for beginners to follow along to. That means if you want to take it to a jam session and play it with other people, it’s nice and simple for them to follow you. Of course, you’re welcome to add the bridge back into the song. The chords are simply Am, G, C & F.

Riptide lyrics for you to sing

A lot of guitar instructors would shoot me for saying this, but playing three chords on guitar does not make a song.

You need to sing and play to make this sound great. Otherwise it’s a bit dull when you try to play it for your friends.

Here are the lyrics for you to sing. Learn to sing and play in bite-sized pieces. Just the first verse. Then the first verse and chorus. Then add the second verse. And so on.

[Verse 1]
I was scared of dentists and the dark
I was scared of pretty girls and starting conversations
Oh, all my friends are turning green
You’re the magician’s assistant in their dreams

[Chorus]
Lady, running down to the riptide
Taken away to the dark side
I wanna be your left hand man
I love you when you’re singing that song and
I got a lump in my throat ’cause
You’re gonna sing the words wrong

The original tuning for Riptide

One last thing you need to know:

Vance Joy’s recording of Riptide isn’t in standard tuning. It’s in the key of Db major, and rather roughly at that.

What that means for you is that when you play along with the original version, it’ll sound way off.

But if you were to try the song in the original key, you’d have to retune your guitar or play unnecessarily difficult chords like Bbm, Ab and Db. Eww.

Instead, I recommend you learn to sing and play it yourself. After all, isn’t that why you’re learning guitar? It’s not karaoke!

I hope you’ve enjoyed learning how to play Riptide on guitar.

Remember to learn little bits at a time, take plenty of breaks, and sing loud!

Once you’re done with Riptide, you’ll enjoy my list of 10 beginner-friendly songs (that aren’t Wonderwall). My guitar courses are full of awesome songs, join me for more. 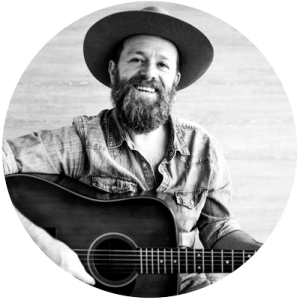 I’m Fidel and I’m here to teach you how to play guitar. It’s fun, easy, and you don’t need any theory to get going.